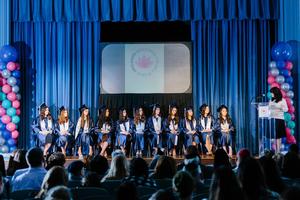 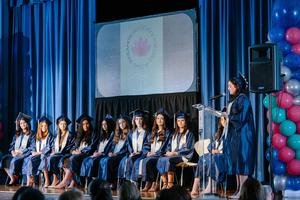 June 17th, 2019, the first graduating class of Shulamith High School made their way to the stage for a momentous inaugural graduation ceremony. Faculty, family and friends all came together to share in this special moment with the Class of 2019, the pioneers of Shulamith High School of Long Island. Having watched the school grow and flourish from its very inception, this moment was significant for the graduating seniors; it was both joyful and bittersweet, but most of all, it was rewarding. Since the day they first joined Shulamith High School, as the first freshman class, the Class of 2019 graduates have completely invested themselves; mind, body, heart and soul, into the growing school. It is at this culminating moment that they look back with pride and a tremendous sense of accomplishment at what has become of the school that they helped to build.

To open the evening, Rabbi Ya'akov Trump, welcomed president of the board, Mr. Ari Cohen, to the stage. Mr. Cohen graciously thanked the graduates, the founding principal, Mrs. Rina Zerykier, and the faculty. He reminded the graduates that while until this point, they had placed their faith in the hands of the school, the occasion of graduation signifies a role reversal; Shulamith is now placing its faith in the hands of its graduates as the girls go on to represent Shulamith and its mission wherever their future takes them. And, Mr. Cohen continued, he has full faith that Shulamith is in good hands. With wishes of mazal and bracha, Mr. Cohen then handed the podium over to Shulamith High School’s Class of 2019 esteemed Salutatorian and Valedictorians.

The first graduate speaker, honored Salutatiorian, Mindy Schreck, spoke eloquently about the meaning of true leadership and thanked Shulamith High School for giving herself and her classmates many opportunities to embody that leadership quality. Valedictorian Hana Adler then spoke about the power of potential and her gratitude to Shulamith for bringing out that potential in her and her fellow classmates. Valedictorian Avigail Sassoon related a parable from Shir Hashirim illustrating the necessity of answering the door when opportunity knocks. It was her willingness to answer Shulamith’s knock and join the budding institution four years ago, Avigail said, that paved the way for endless and otherwise unimaginable opportunities to present themselves. She thanked Shulamith for opening wide the door to countless unique opportunities and experiences, and she urged her fellow classmates to remember to always take risks and take chances; because very often, great things will follow.

Following the three speeches, graduate Sela Pollack, honored with the Keter Shem Tov Award for exemplary middot, refinement and Yirat Shamayim, was then called up to receive her award.

The final speaker of the evening was Shulamith High School’s founding principal, Mrs. Rina Zerykier. She prefaced her speech by placing an emphasis on the importance of the topic she would imminently speak about; she explained that over the years, she has had the opportunity to give over countless messages to her graduates - through many speeches, conversations and discussions - and so, in her last and final message to them as her students, she wanted to focus on the most important message she could give over. That message, concluded Mrs. Zerykier, is the importance of being an “Eved Hashem.” Although that may sound simple enough, Mrs. Zerykier then posed the question, “But, how does one do that?” She cited a Rashi from Megilat Rut discussing the 6 traits that the future Mashiach must embody; Chachma, Binah, Ruach Eitzah, Gevurah, Da’at and Yirat Hashem. Mrs. Zerykier explained that these six traits are the key to living a meaningful life. She gave the graduates a bracha that each of them, in their life’s journey to becoming an Eved Hashem, should attain and possess these crucial and necessary qualities, and she explained how each of these traits can and should apply to the graduates as they embark on the next stages of life.

A video compilation followed Mrs. Zerykier’s speech, featuring photos of the graduates over the past four years. Each graduate was then briefly spoken about and wished Mazal Tov by a faculty member who then presented to her, on behalf of the school,  her diploma and a gift. And then, in the moment the graduates and their families had been much anticipating, the girls flipped their tassels from right to left and walked off the stage to hugs, bittersweet tears and congratulations of family, faculty and friends.

Congratulations to the first graduating class of Shulamith High School, the Class of 2019/5779! May they see much success in their coming years as they all continue on to seminary and college, and in all their future endeavours. Mazal Tov!